In 2013 Brad Ortenzi and his wife Lori felt they were being called into ministry, but didn’t know exactly what that would look like. “At that time, I was working with the Lancaster County District Attorney’s Child Pornography Unit in Pennsylvania, of which I helped to start,” shared Brad. “I had worked a lot of child sex crimes in my career, but not at this level. My heart began to break for kids even more so than it had before. I was working online acting as a pedophile and getting child pornography from pedophiles. Or I would be online chatting with the bad guy, as a child, and the bad guy was trying to entice me for sex. I would get the child pornography and have to view it to document the affidavits.”

Brad’s heart was breaking for these kids who had been sexually exploited while in the background of his life he was being called to ministry. One day he heard about ZOE and their mission to rescue kids and reached out to the founders, Mike and Carol.

“Mike and Carol invited us to Thailand to see ZOE first-hand, and it was there that I experienced a life-changing event,” shared Brad. “One night in Thailand while we were participating in a prayer session with the kids, ZOE staff, and missionaries, one of the children came up and laid her hands on me and started praying for me. I just broke down. God spoke to my heart and said, ‘you have been chasing after justice your whole life, well this is what my justice looks like.’ My heart to God was like, whatever this is, I am in. I want a part of this. I want to use my investigative skills to help kids
and add to that the spiritual side of healing
and restoration.”

After this life-altering experience, Brad and Lori went home from this missions trip with a new purpose and direction for their life. They went back home and took an early retirement. In November 2014 they sold their house and their cars and returned to Thailand as full-time missionaries with ZOE.

“I was being called to be the Director of ZOE Child Rescue in Thailand that was established in 2004,” said Brad. “I managed five teams. ZOE’s philosophy with missions is, you are there to work yourself out of a job. We are there to bring our experiences and skillsets of who we are, to pour into the Thai nationals, so that we can eventually back out and have them run what we’ve started. The training consists of discipleship, leadership and development.”

For five years Brad held this position at ZOE Thailand. “I enjoyed pouring into the Thai staff,” said Brad. “They were all so loving, caring, hard-working, and passionate toward the kids. I was honored to help build the structure of five teams and overjoyed to watch them run with it and make it even better.”

Prior to going into police work, Brad served in the Marine Corps for four years and then worked 20 years as a detective in Lancaster County, Pennsylvania. “Those five years in Thailand were by far the most remarkable and memorable years of my career,” said Brad.

In 2019, Brad and his wife Lori left Thailand and moved back to the states. “Before moving back, I spoke with Mike and Carol to inquire about the possibility of expanding ZOE on the East coast,” said Brad. “We were all in to begin networking and building donor relations and I became the Eastern USA Regional Director for ZOE.” 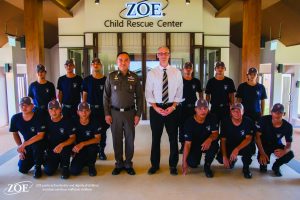 “In 2020, the Founders of ZOE agreed to donate my time to Lancaster County for me to serve as the Coordinator for the Human Trafficking Task Force,” said Brad. “As the Coordinator, I research other task forces in Pennsylvania; look at how they are structured and what is and isn’t working, and research best practices. I have been taking that research to the District Attorney’s office, and giving her my suggestions on how we should proceed. I have since created a draft and structure of the task force using a little bit of what’s working in other states, and also what is working in ZOE Thailand and Los Angeles. I have also been working to collaborate with other government, nonprofit organizations and ministries to meet the needs of the task force. I am excited. We are few months away from officially launching the task force.”

The Lancaster County Human Trafficking Task Force will work to investigate, prosecute, and find restorative paths for trafficking survivors within Lancaster County. This will also include community outreach with prevention education and awareness of trafficking.

“With ZOE’s work with the Task Force, we are going to find the gaps that need to be filled by agencies and nonprofits,” said Brad. “The vision for the future of ZOE East Coast would be to build out an advocacy system like we have in Los Angeles. There is also a possibility of opening a restorative home in Southeast Pennsylvania and enhancing some type of Christian-centered foster care for trafficked children.”

The Heart of Brad’s work and passion

“People often ask me why I do what I do,” shared Brad. “My ultimate desire is to see restoration of the children. And, it comes down to the duality of Jesus. He has a warrior heart that fights to rescue His children and He will stop at nothing to make sure those rescues happen. And then there’s the protective loving side of Him, along with the duality of His daddy restorative heart. He just wraps his arms around his kids once they are safe. That has changed my life.

I have come to a whole different level in my appreciation for who God is and how He cares for us. It’s all about the end game for me — that child accepting Jesus into their heart and worshipping Him.”

ZOE Cycling Events – Race Across America and Road of Justice 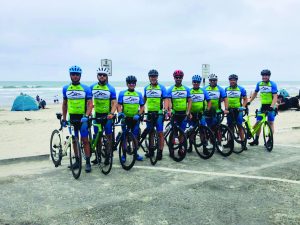 ZOE’s Cycling events came about when Brad and Lori had a desire to help fundraise for the new ZOE Home for Youth that was to open in Los Angeles in 2021. “We were avid cyclists and living in Thailand at the time,” said Brad. “We thought, what if we planned a coast-to-coast cycling event – which became the first Road of Justice in 2018 – and invite people to come with us and raise awareness about human trafficking and empower people to be fundraisers for ZOE.”

The 2018 Road of Justice started in Virginia and finished in Santa Monica. “Over 45 cyclists biked 3,800 miles, in over 46 riding days,” said Brad. “Some rode for a day, some rode for weeks or months. We raised close to $300,000 that year. We realized then we had something that could work for ZOE.”

In 2019 ZOE entered an 8-man cycling team in Race Across America (RAAM). For 39 years, the RAAM has become a global icon, challenging ultra-cyclists from over 35 countries to push their physical and mental limits to the utmost. “We started the race in Oceanside and finished in Maryland,” said Brad. “We biked 3,000 miles in 6 days and 5 hours and came in third place. We averaged 20.3 miles an hour for 3,000 miles and climbed 100,000 feet. Together the team raised over $175,000 for ZOE.”

Another ZOE Cycling event, the Road of Justice, is scheduled for October 11-16, 2021. Any cyclist can participate in this event. The race will begin in San Francisco and end in Santa Clarita. For more information or to participate as a cyclist, visit our website.