A group of Lancaster County residents are preparing to set off on a 3,000 mile bike trek to raise money for an international nonprofit that combats child sex trafficking. An eight-man relay team and 12 crew members depart from Oceanside, California, on Saturday with a plan of arriving in Annapolis, Maryland, less than a week later as part of Race Across America (RAAM), an annual ultra-endurance cycling race that spans the United States. 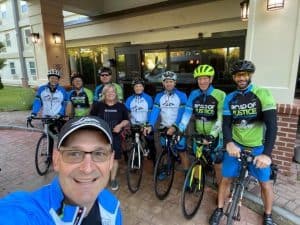 “It is a race,” said team leader Brad Ortenzi, 53, a former Ephrata police detective who served for 20 years, “but it’s more of a platform for nonprofits and cyclists to either raise awareness for a project or to raise funds for charities.” RAAM cyclists raise more than $10 million each year for their charities of choice, according to the organization’s website. The Lancaster County team’s sponsored charity, ZOE International, is focused on helping survivors of child sex trafficking across the globe.

“ZOE is bringing freedom to many children, and I want to stand with them because I believe in what they are doing,” said team member Allan Fisher, 33, of Gordonville. 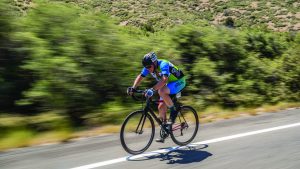 Ortenzi, ZOE’s Eastern U.S. Regional Director, has been involved with the faith-based international nonprofit with operations in five countries since 2014, when he visited their refuge house in Thailand to meet with child survivors of sex trafficking. “Every one of them was a fighter – fighting to get their life back,” he said. “Their fight inspired me and changed my life. Competing in the Race Across America allows ZOE to take this fight against child sex trafficking across the United States.” The Lancaster County team’s goal this year is to raise $250,000 for ZOE, with more than $198,000 already raised, according to ZOE International’s website.

Ortenzi had been working undercover online seeking out traders of child pornography, a job he described as “heartcrushing” work, when he began looking for a new career he could take on post-retirement. It was Ortenzi’s pastor who suggested that he reach out to ZOE, believing he would be a natural fit due to his background in law enforcement. “It was clear from the beginning that Brad has a passion for justice,” said Brian Flewelling, a pastor at Petra Church in Earl Township, which Ortenzi has attended since 2012. “He has a skillset that is unique to anyone else in the field.” Flewelling helped facilitate a meeting between Ortenzi and a person who was connected with leadership at ZOE’s Los Angeles campus.

“To see (Ortenzi) emotionally moved by the mission and mandate that ZOE was carrying, it was clear that something was happening in his heart and his spirit where their vision was being shared,” Flewelling said. “He really felt a need to be a partner in that.” From there, a trip to ZOE’s refuge for child victims of sex trafficking in Thailand was quickly arranged. 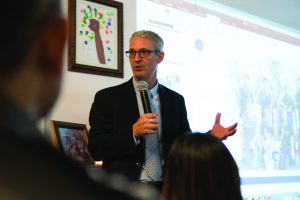 “They were cared for, they were loved, and they were on their way back to a really healthy path,” he said. Ortenzi later wrote in his journal that “it seemed like they had a grasp on joy that I didn’t.” “Never being around trafficked children before, I expected the worst,” he said. “We just didn’t see that. These kids were really on a good path.” During one prayer session, an 8-year-old girl who had been rescued from sex trafficking offered a prayer. It was for Ortenzi. Though he didn’t understand the child’s Thai language, Ortenzi said the moment made Ortenzi and his wife feel he had a new calling in life.

“’You have skills right now that could help free rescued trafficked children, and there’s no amount of retirement that could add up to that,’” Ortenzi said his wife told him. Moving from Lancaster County to Thailand was a gargantuan undertaking, Ortenzi said, but “this was something we wanted to be a part of.”

Regional Director Ortenzi and his wife arrived to find what he described as a “first-class operation” consisting of about 100 Thai staff and another two dozen international missionaries, but what really impressed him was the bravery and resilience of the children.

“It was a culture shock, but we were both world travelers before,” he said. “In the military I was all over the place.”Now back in the U.S., Ortenzi has since been tasked with helping coordinate a new anti-human trafficking task force by the Lancaster County District Attorney’s Office, an effort ZOE is assisting by donating his time to the county.

Ortenzi first came up with the idea to ride bicycles across the country to raise money for ZOE in 2018, when he and 46 others rode from Virginia to California, raising nearly $300,000 for the nonprofit, in an event unrelated to RAAM.“We realized we probably had a pretty good idea here,” he said. Ortenzi and his wife were in the process of moving back to Lancaster County from ZOE’s Thailand branch in 2019 when they learned about RAAM and decided to enter their own eight-member relay team, nearly identical in lineup to the team that’s competing this year. Some of the team members had been cycling with Ortenzi since that first cross-country trek in 2018. Others he knew from church, or from friends of friends. “They’re all just guys who love cycling and really connected with what ZOE is doing,” Ortenzi said.

The Lancaster County cyclists took their training and preparations seriously for the race, “but once we got on the road it was more intense than what we thought,” Ortenzi said. “We didn’t really know what to expect, and quite honestly we were sort of going naïve into the situation,” he said. “We trained hard and we tried to prep hard, but the logistics of this thing were almost astronomical.” The team was racing at a much faster rate of speed than what they were anticipating, throwing their lodging plans into disarray. “We were pretty much on the run and we had to make some major decisions and change things up,” Ortenzi said. Even with the logistical hurdles, the team placed third in its division, finishing with a time of six days, five hours and 52 minutes – an average of 20.3 mph. 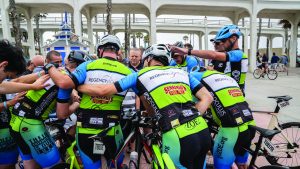 “RAAM officials had mentioned that they don’t remember a rookie team ever being on the podium,” Ortenzi said. “They were pretty surprised, and we were pleasantly surprised as well.”More importantly, the team raised more than $175,000 for ZOE International.This year, team members are taking into account the lessons they learned in 2019 and are hoping to avoid some of the same mistakes they made.Training began at the end of last fall, with team members hoping to reach the peak of their cardiovascular fitness right as the race is set to begin.

Training can involve “a little bit of everything,” Ortenzi said, including swimming, weight training, running and meeting with personal trainers. Many of the more recent training regimens have taken place on bicycles, with team members riding at least four to six times each week, sometimes for hours at a time.The thousands of hours spent training for the race since the fall were made possible because of the race’s philanthropic focus, Ortenzi said.To that end, more than one dozen local businesses and organizations are backing the team.“Lancaster Countians really seem to rally around us and engage with what we’re doing,” Ortenzi said. “It became a really great awareness project for ZOE here in Lancaster County.”

People interested in donating to ZOE International’s cause can do so at https://gozoe.org/raam-2021/.