“After competing in 2019, we knew our limitations and capabilities and thought we might have a chance to win this year,” shared Brad. “We set out to do our race and not let the competitors set the race for us. We knew we couldn’t make a mistake. So we plugged all the gaps we had in 2019, and we trained a lot harder this year. Ultimately, we capitalized on the experience we had from 2019 to win the race in 2021!”

For 39 years, the RAAM has become a global icon, challenging ultra-cyclists from over 35 countries to push their physical and mental limits to the utmost. RAAM has also become an enormous platform for cyclists to raise funds for charities that they hold close to their hearts. Each year, RAAM cyclists raise over 10 million dollars in donations, dispersed to multiple charities. 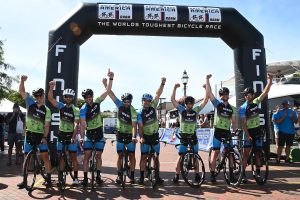 “While visiting the home for children who have been trafficked at ZOE Thailand, I was inspired by the children’s fight. Every one of them was a fighter – fighting to get their life back. Contact: Brad Ortenzi (717) 708-8109- cell brad@goZOE.org Lonna Gibson (661) 388-1295 lonna@goZOE.org – Continued – Lonna Gibson (661) 388-1295 lonna@goZOE.org Their fight inspired me and changed my life. Competing in the Race Across America allows ZOE to take this fight against child sex trafficking across the United States.”

Cyclist Allan Fisher added, “I wasn’t aware of human trafficking happening in the states. ZOE is bringing freedom to many children, and I want to stand with them because I believe in what they are doing.”

Not only do the cyclists compete in the race, but they also have a goal to raise $20,000 each for ZOE International.

“It costs about $70,000 for us to compete in the race, including the entrance fee, uniforms, helmets, fuel, and travel,” said Brad. “Any additional monies raised over the cost of expenses are donated to ZOE International to help rescue more children and care for and restore the rescued children entrusted in their care.”

ZOE International was founded in 2002 with a mission to reach every person with God’s love and rescue every child from human trafficking through prevention, rescue, and restoration efforts in the USA, Thailand, Mexico, Japan, and Australia. More information about ZOE International can be found at goZOE.org and the 2021 Race Across America at www.raceacrossamerica.org.